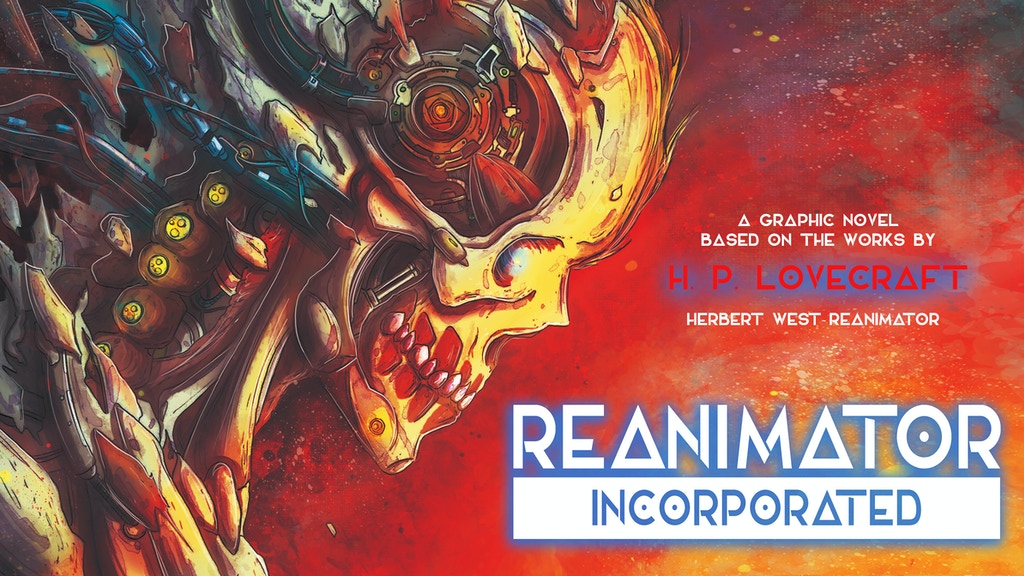 Order Reanimator Incorporated Chapter One, as well as other comics and graphic novels from the production team. For more information on the original campaign and a free preview, check out: https://www.kickstarter.com/projects/amperry/reanimator-incorporated/description

Latest Updates from Our Project:

We've just released a new Kickstarter that features the Lovecraft Legend: The Call of Cthulhu A5 print that was bundled with Reanimator Inc. Chapter #1 - but this time it's in glorious A2 size!

The link to the Kickstarter is here...

You can even zoom into an HD version of the poster here...


In other news, Chapter 2 is now in the final editing process and we hope to start work in the next month. More news and sneaky peaks to follow.


As to be expected, here is the casual Kickstarter reminder for Candles, now the book has officially launched.

I'll be sharing more of the artwork over on the Canldes Kickstarter page and across social media. There's plenty more magic and monsters to come. For now, I'll leave you with a fire witch.


Thanks and all the best,


It's Lyndon here and I wanted to give you a project update on what I've been working on these past few months and where we are at with Chapter Two.


Firstly, some house keeping. Since we wrapped up Reanimator Incorporated: Chapter One, I've been hard at work on my other graphic novel, Candles. Now some of you may be asking, "Why has he been working on another book while we are waiting on Chapter Two?" Good question. I'm glad you asked.


To begin with, I'd already started work on Candles when Andy approached me about Reanimator and due to scheduling, project reshuffling and deadlines, Reanimator Chapter One got bumped up the production time line and came out first. Which isn't a bad thing. It's given Andy some time to work on the script for Chapter Two (and Three shortly to follow), while I scribble away on another project.


So what is Candles?

Candles is my all ages, fantasy (with a sprinkle of horror) 144-page graphic novel, full of magic and monsters.


Generation after generation, people are taught one thing – never, ever, use magic…


When a plague known as Dark-bark begins to spread over the land one by one  infected villagers disappear into the enchanted forest never to be seen  again. When it reaches her village, a young girl called Grace sets out  to destroy the evil witch she knows is responsible, desperate to save her family by any means  possible – even if that means she must break the greatest taboo of all and steal the witch’s magic.

The book is coming to Kickstarter on the 21st of June with Cast Iron Books, a new independent publisher of graphic novels and illustrated books based in the UK. The Kickstarter is to cover the printing and production costs, now that I'm about to finish the artwork on the book.


While this isn't Lovecraft, there are many, MANY monsters throughout the book and my painted, inky artwork is across every page. The book is directly influenced by traditional Brother's Grimm fairytales and Studio Ghibli films. I'm on writing, artwork and lettering duties with this one, so its a 100% Lyndon book.


For those of you who are interested, please check out and pre-sign up to the Kickstarter via the link. I'll be sharing more pages and artwork as we ramp up to the launch. If this one isn't for you, please share it if you can and sit tight while we work on Chapter Two. Once I wrap up work on Candles, I'll be diving straight back into more Reanimator.


Sorry it's been a while since our last update. A lot has been going on personally - namely a house move and an impending wedding (which has been delayed a few times already). The good news is, I'm moved in and - unplanned catastrophe aside - should be getting married in just over a week's time :-)


Reanimator Chapter 2 news: I've feedback from the editor which I need to work on. Specifically, some story restructure and being more overt with our protagonist's ethereal journey. I've some time off from work soon (which has also been eating into a lot of my time), so should have a new draft for the editor by the end of June. With a fair wind, and the production team in agreement, this means Lyndon can start the drafts in July.


Lyndon's excellent looking Candles will be launching on Kickstarter soon. He'll be making an update shortly with more news.


In the meantime, I'd also recommend checking out Digitopia by Farhan Qureshi available now on Kickstarter here


Digitopia is a pre-apocalyptic action adventure story of a father and daughter trying to survive in a civilisation that is imploding, where everyone from the army, society and bounty hunters are out to get them.

That's all for now. I'll be back in touch in a few weeks with news on the next draft and a timeline for the production of Chapter 2 (and maybe even Chapter 3).

Hi everyone, I just wanted to drop you all a line and recommend another Lovecraftian Graphic Novel - The Shadow Over Innsmouth.


It's produced by Simon Birks of Bluefox comics and its in the final 24hrs after funding in *checks notes* 5 minutes!

You can find more about the campaign here...


Take care everyone, and keep an eye out for Reanimator Incorporated Chapter 2 updates soon,